A day filled with horse activities

It was 10 o’clock by the time we had taken care of all the animals (and ourselves) and headed for the boys’ pasture to get Cello. We’ve taken to calling the pasture where Cello and Tango live the boys’ pasture, the one where Failte, Galaxy and Melle live the girls’ pasture, and the one in between Toasts’ pasture…

Like yesterday, we took Cello to the arena we had improvised. It’s approximately 12 x 12 meters, which makes it ideal to do ground work with a horse Cello’s size. First, we brushed him and cleaned out his hooves. He’s a friendly chap and well behaved, and didn’t mind us touching him at all. Once that was done, Christophe went to work with him.

I left the arena and watched from the side, giving instructions and advice. The goal is to be able to send the horse on a big circle around you, whereby you are in control of direction and tempo. However, unlike when you lunge a horse, there is no physical connection between you and the horse. All you have to communicate with him is your body.

This way, you learn how to use body language to communicate with your horse. And the only way it is going to work is if you use it like horses do amongst themselves. Which isn’t easy, because their language is very subtle and Cello is very sensitive.

So today, I wanted Christophe to let Cello walk around him and change direction at his initiative, with as little stress as possible. Like yesterday, Cello immediately started trotting, but this time he settled down quickly and managed to keep walking most of the time. And by the end of the session, Christophe managed to make him change direction without trotting, and Cello lowered his head a little bit and did a bit of chewing and licking. Which are all signs of relaxation.

We took Cello back to the pasture and took Tango out. He’s the opposite of Cello. You need to expend a lot of energy to get him to walk and trot. Christophe couldn’t get him to move at first, so I gave it a try. My own horse Wouter is a lot like Tango, except that he was even harder to get to move when I just started working with him. So I have a bit of experience with horses like Tango and got him to move. Once Christophe had observed that for a few minutes, he gave it another try and was succesfull. Though he had to admit that working with a horse that isn’t very willing to move is a lot harder than working with a horse that will run at the bat of an eye.

Satisfied, we reunited Tango and Cello and had lunch.

An afternoon at the races in Pompadour

The afternoon was spent at the hippodrome in Pompadour. The lady at the tourist information had told us the first race was at 14:30h. When we arrived at about 2 o’clock, we discovered that the first race had been run at 13:30h, and we had just missed the second one. Fortunately, there were 5 more races.

It’s great to see the eagerness, the power and the speed of these horses. And the atmosphere at the venue is quite good; very relaxed. But I cannot close my eyes for the way these horses are treated. They:

But the difference with human athletes is that they have chosen their sport of their own free will. Horses aren’t given the choice. They are made to do what their owner wants them to do, and they are kept the way their owner sees fit. Which has nothing to do with what horses need, but everything with money and the human ego. And that saddens me no end.

Horsemanship with great respect for the horse

Fortunately, there was a show between the fourth and the fifth race. By Lorelei Leasslé, whom we had seen a couple of nights before in the show in the Haras National de Pompadour. She rode two bitless horses, standing on their backs, guiding them where ever she pleased, with just her voice, her feet on their backs and the reins. She went on to play with two or three horses at the same time, all of them completely free. They would voluntarily do whatever she asked them to. Afterwards, she left the grounds, leading her three horses, two of them with just a rope around their necks. Now there’s real horsemanship for you! 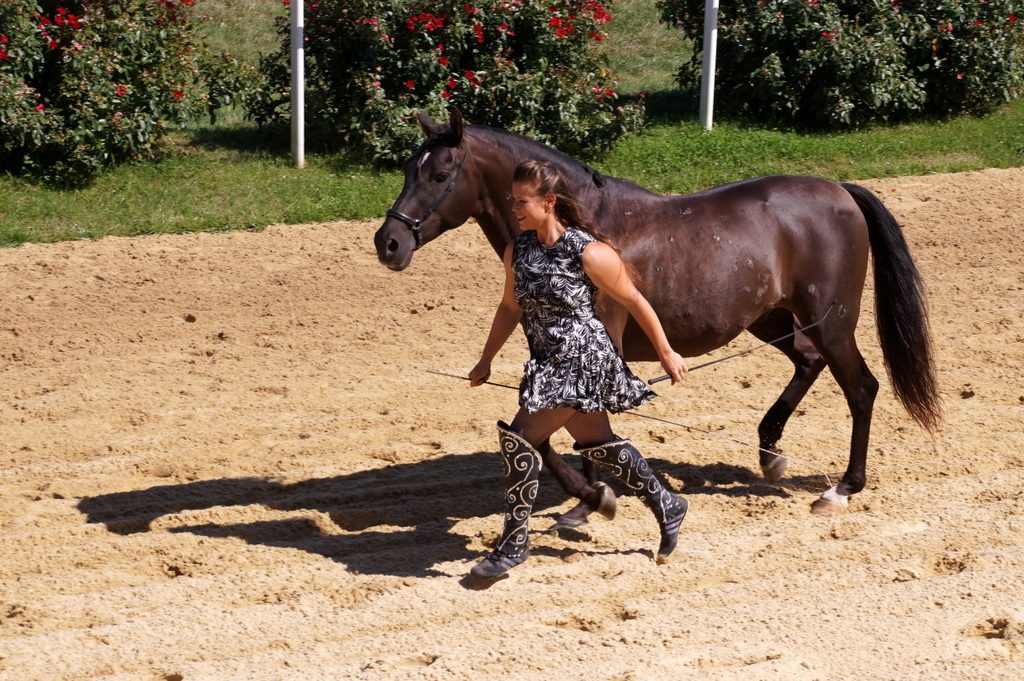 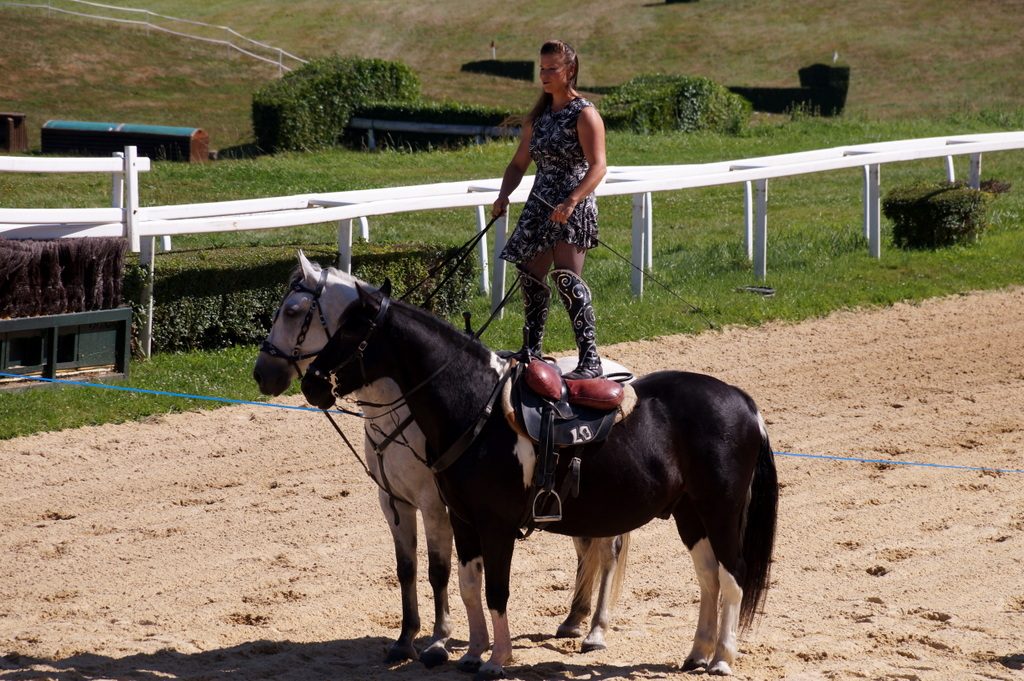 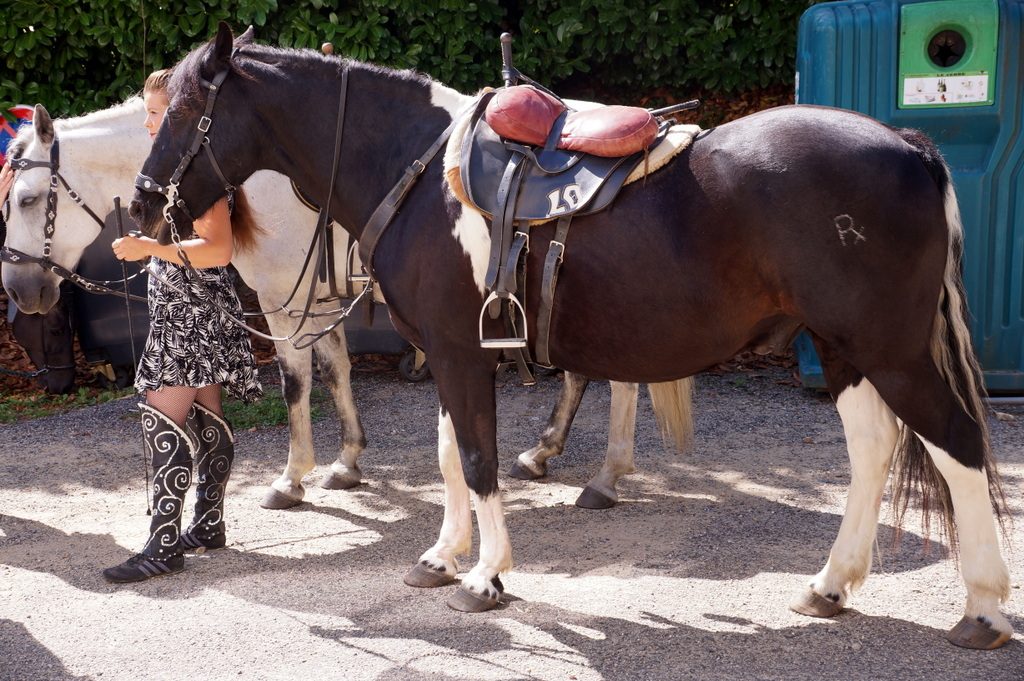 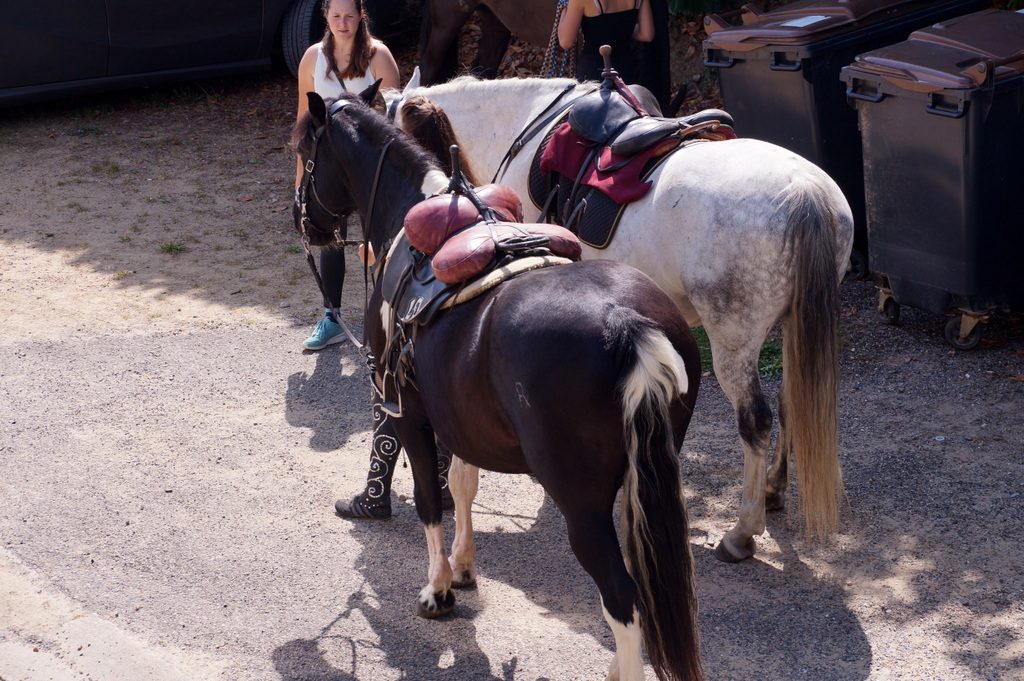 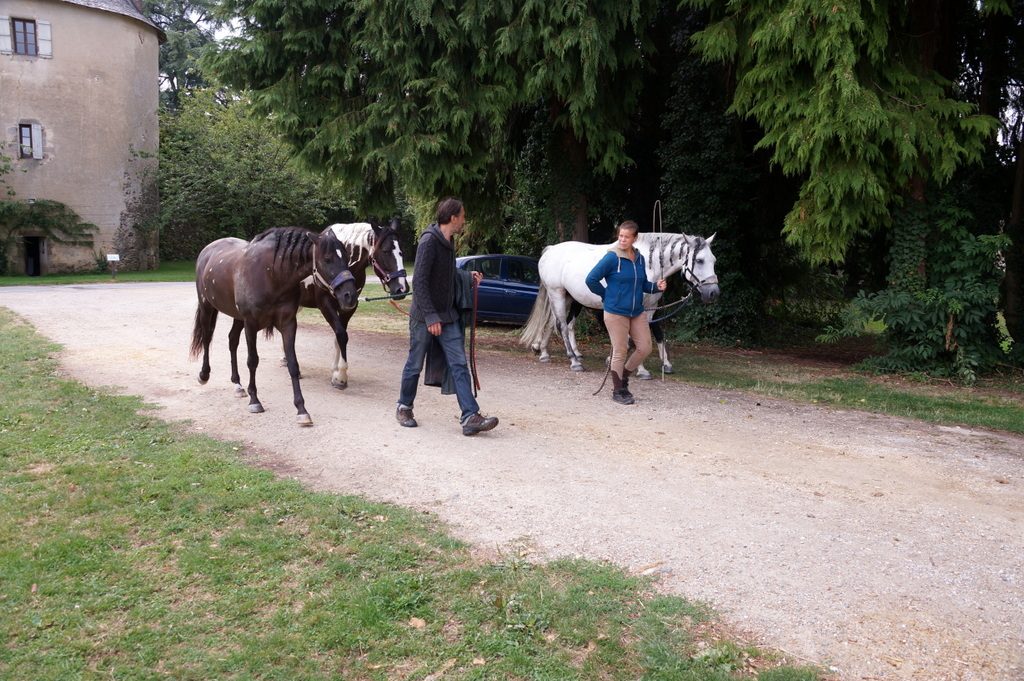 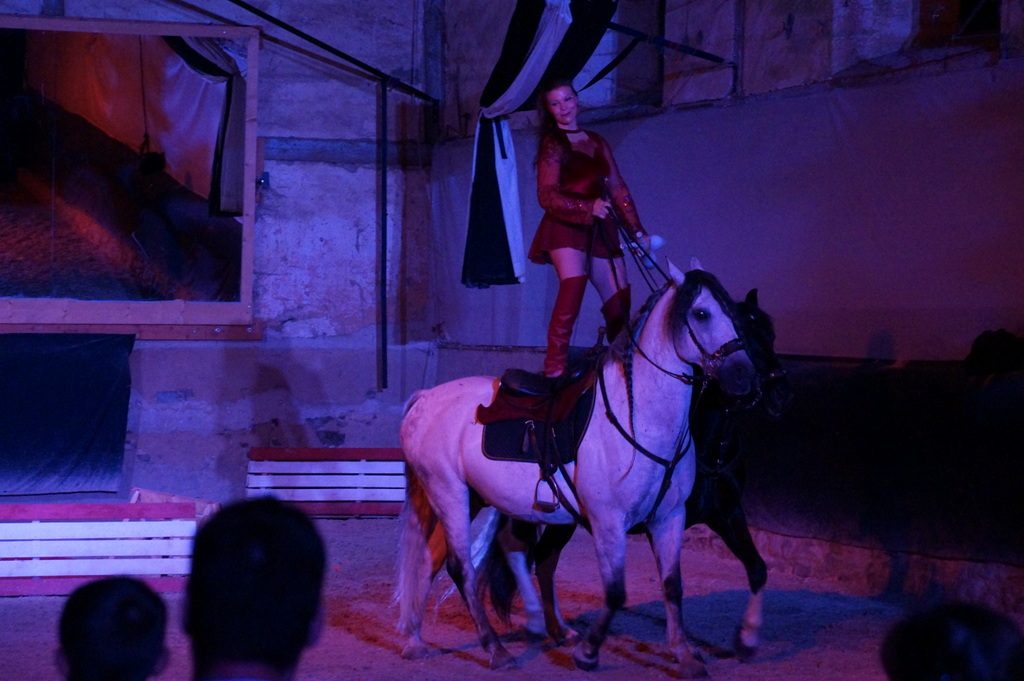 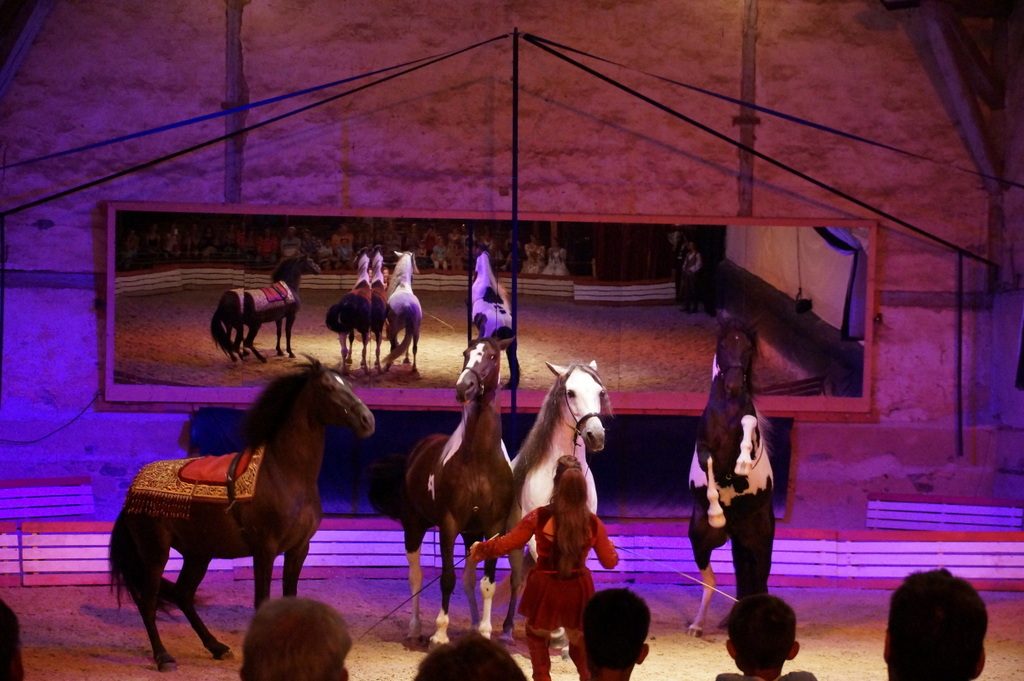 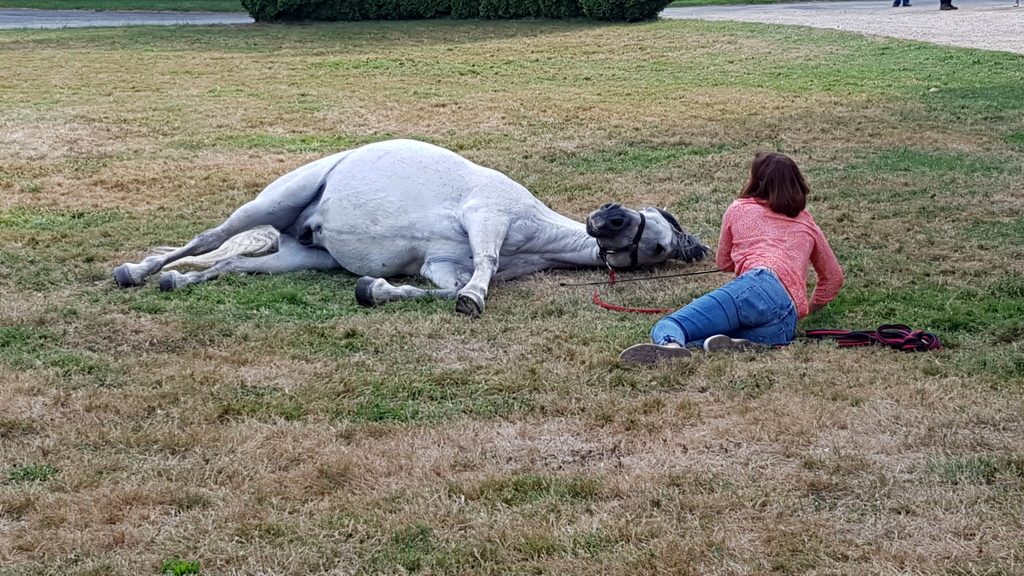 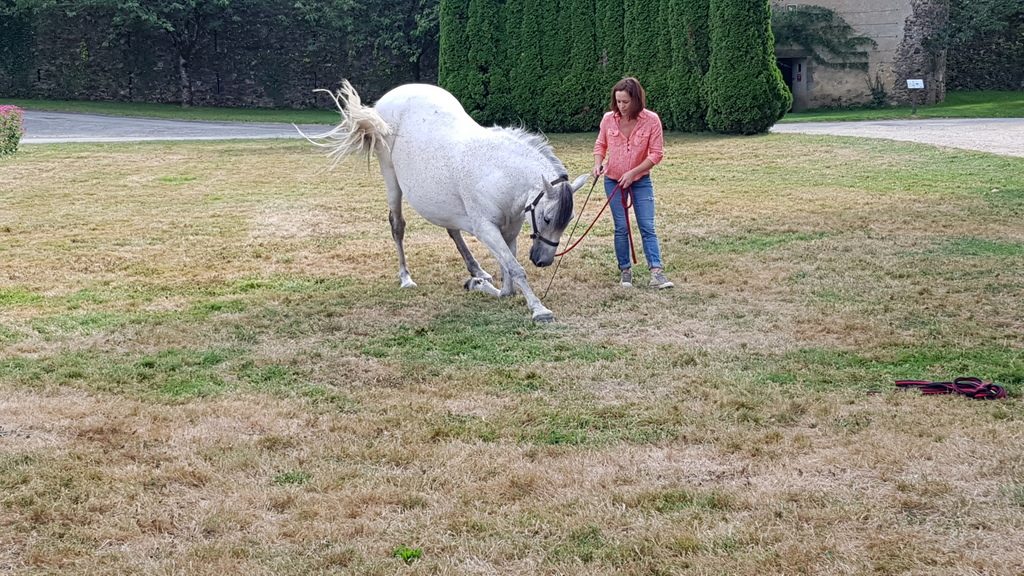 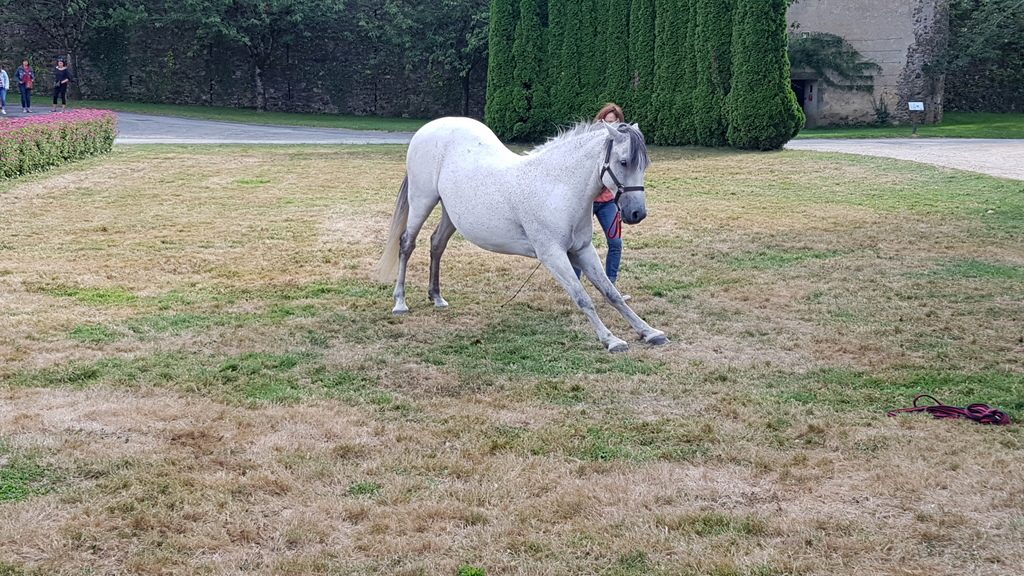 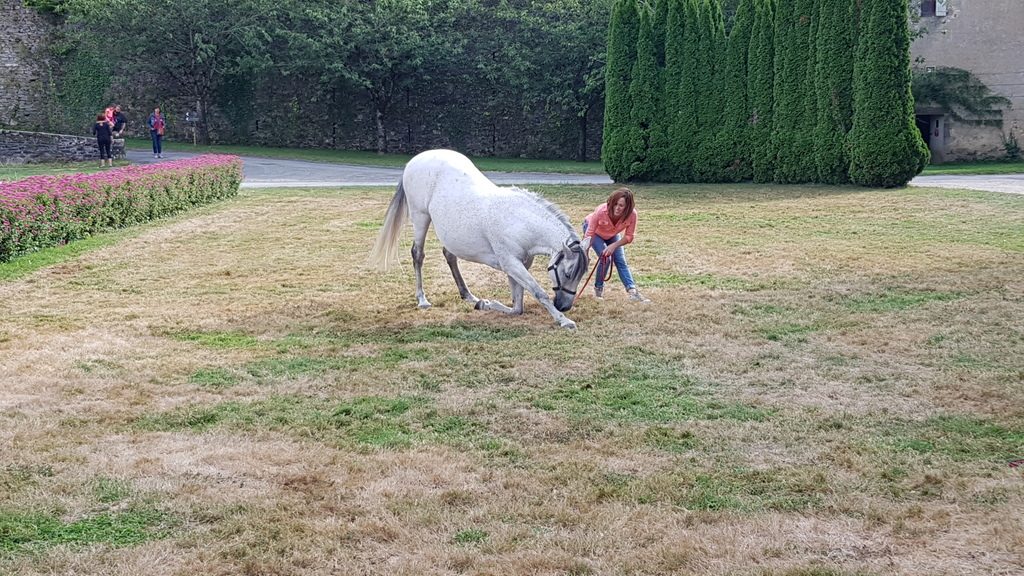 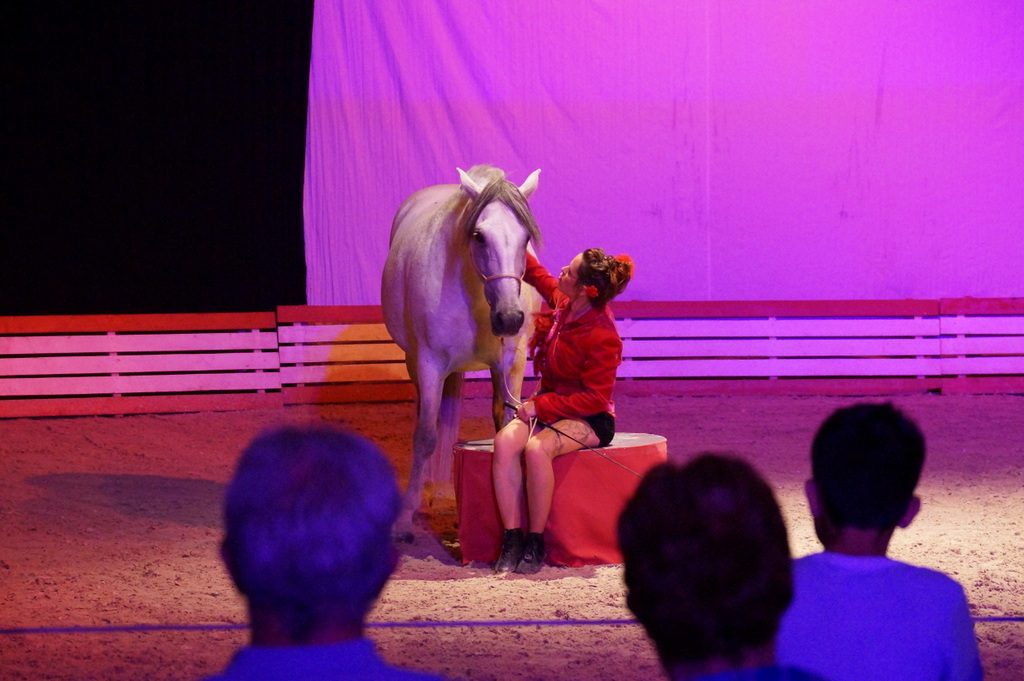 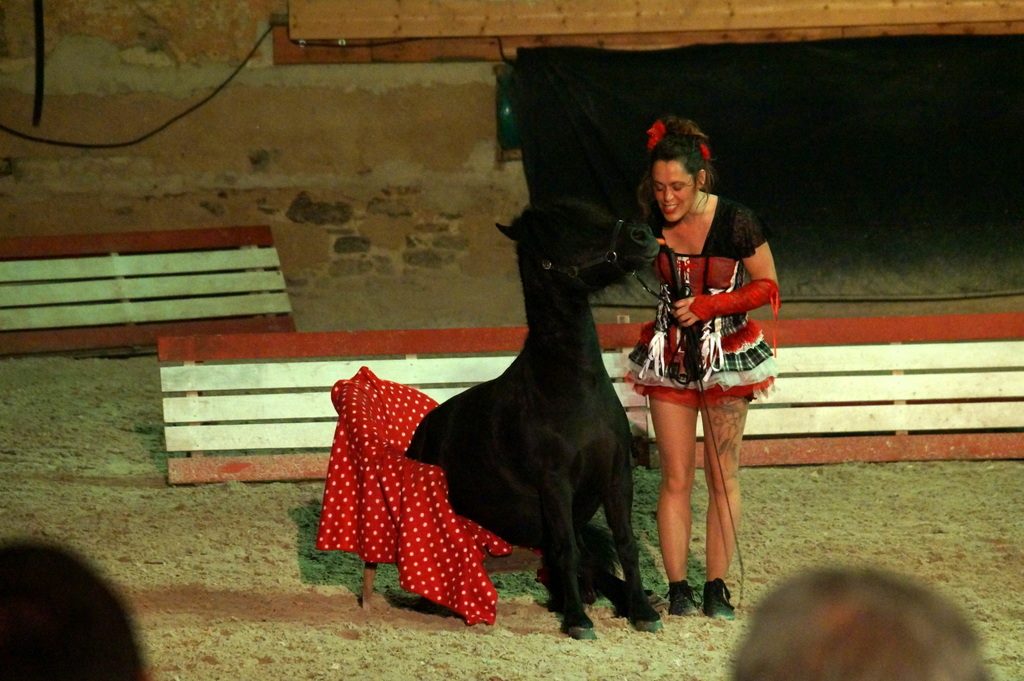 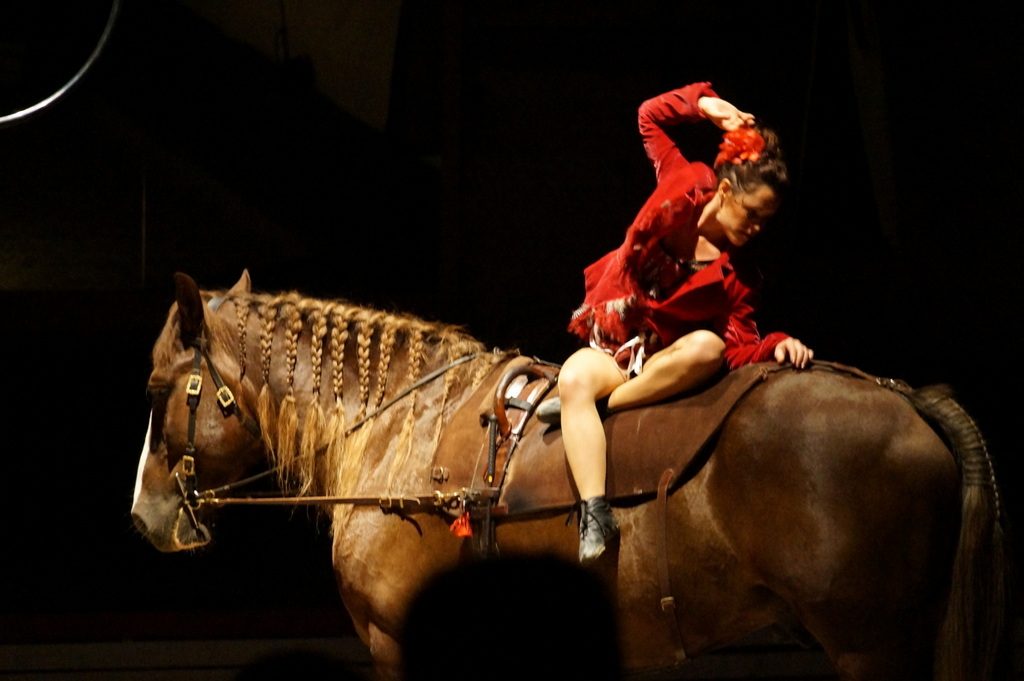