Two years ago, Christophe’s aunt Monique moved from her apartment in Paris to a nursing home in the suburbs of Paris. Her health (both physical and mental) was failing and she just couldn’t live alone anymore.

Christophe has been her guardian for close to 5 years now, and it was a very hard decision to make. Fortunately, Monique recognised the necessity of the move, though at the time she believed it would only be for a while, “until she recovered”. But one doesn’t really recover from being 87 years old, does one…? On the contrary, she kept losing more and more of her abilities and has been confined to a wheelchair for 6 months now.

Living in a nursing home is quite costly. Which is why, over the course of this year, the apartment is going to be sold so that the revenue can be used to pay for the nursing home. Which is why Christophe and I are currently living in said apartment. It’s a duplex totalling approximately 60 square meters. Monique lived in it for over 35 years.

When we first arrived, it was overflowing with…. stuff. We systematically worked our way through every closet, drawer and surface, eliminating everything that wasn’t worth saving. That already filled a large number of trash bags.

Imagine over a dozen big plastic plants that had been standing in corners gathering dust all those years. Just getting rid of those was a huge relief and made the apartment so much more spacious and liveable. We also packed a lot of stuff that could still have some value to someone and had Emmaüs pick it up. Just before they arrived we put everything out in the hall of the floor. It was at least 4 cubic meters. Bye bye…! 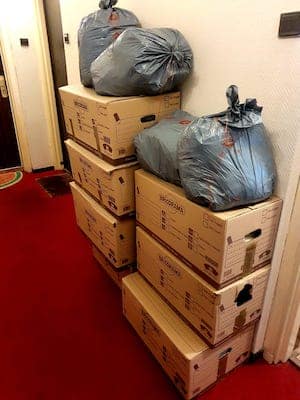 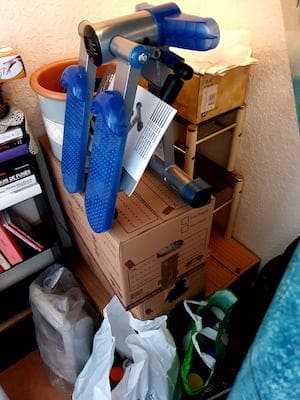 Imagine 8 fur coats, enough towels to satisfy a small hotel, a tiny kitchen full of appliances that were never used, and so on and so forth. She had surrounded herself with stuff. And she’s not the only one.

Shop until you drop

These days, we are implored by our surroundings to buy, buy, buy. Consumerism is the norm. It’s like the new religion. And it’s very hard to resist. We are constantly bombarded with messages telling us our life isn’t complete without this or that product.

A lot of this happens online. And since millions of people seem to be glued to some screen or other most of their waking life, they are continuously under this barrage of messages. When going outside in a city, this is augmented by all the food on offer. A large percentage of people “shopping” seem to be eating and/or drinking while doing so.

What does this all lead to? It leads to the accumulation of stuff.

The Accumulation of Stuff

During the first lock down, I remember seeing this woman in the news who told the interviewer that she was saving so much money, because she would normally spend about 300 euros per month on clothes. I was stunned. What on earth are you going to do with all that?

The accumulation of stuff has a lot of (side) effects. First of all, it costs precious resources to produce and money to buy. Then, it takes space to store. We need more closets, bigger houses, etc. In many cases, the money spent to buy stuff will never be recuperated. We recently tried to sell stuff online and well, let me put it like this: you’ll never grow rich doing that.

I am NOT what I own

And then we compare ourselves to others and we fall short. Or actually, we compare what we have to what others have and we feel that we fall short. Because we identify ourselves with our stuff. We continue to buy more and more, even if we don’t have the money for it. We buy on credit, we get in debt…

Thus continues the vicious cycle. We never feel satisfied and always feel that there is something lacking. If only we had X, then we would be happy. But shortly after acquiring X, we feel lacking again, because now we feel like in actual fact, we need Y to be happy.

What we fail to see is A) we are not what we own and B) no matter how much stuff we accumulate, it is never going to make us happy. In my personal experience, the opposite is true.

I am an avid reader and I used to want to own every book I read. At the dawn of online shopping, I would order a stack of books every couple of months. I loved seeing all those books in my library. Yes, I had a library… And then one day, it occurred to me that I hardly ever reread any books. Because there would always be more books I hadn’t read yet. So if I wanted to own every book I read, it would cost me quite a bit of money and I would run out of space. And I asked myself, for the very first time: what for?

Did it really make me happy to own all those books? Being very honest with myself, the answer was no. And thus started my journey into minimalism. Well, not minimalism to the extreme, but at least becoming conscious of my consumption.

I sold and gave away 90% of my books, keeping only some about subjects that I care deeply about (cooking, gardening, horses). Books that I will refer back to from time to time, so it really is a pleasure to actually own them.

Next were my clothes. I had a long hard look at my wardrobes. Yes, plural… Over a period of several weeks, I cleaned out my wardrobes. I remember the first time. I had filled two big trash bags with clothes to give away, and it didn’t even seem to make an impact in my closets! So I kept at it. There were many clothes that I had bought because I liked them, but the truth of the matter was: I never wore them. There was something off… And so they went.

Getting rid of my stuff felt so liberating!

While still in the process of weaning myself of an excess of clothes, I started to look at other stuff. The more I thought about it, the more it oppressed me. Something changed in my mind (or maybe on a more fundamental level even), and I became obsessed with getting rid of stuff. So I had a very honest look at all my possessions and got rid of everything that I didn’t use, that I had no emotional attachment to and that didn’t add value in some other way.

It was liberating! I felt soooo much better having so much less!

We are all so caught up in the habit of consuming that we have completely lost our rational minds. We allow corporate marketing to dictate what we consume. But if we take a step back and consider for a moment what we are doing, we might start seeing the madness behind our behaviour.

Three years ago, Christophe and I decided to become digital nomads. We’ve been house- and pet sitters ever since, traveling through Europe with our Opel Vivaro. In November 2019, we flew to Thailand, with just a backpack each. We stayed for three months and then another month in India. And we lacked nothing!

Instead, we gained a lot: freedom. Not having much stuff means more time to do the things you love. You don’t have to pay much money to insure your stuff or spend much time cleaning and maintaining it. Having few things is actually very satisfying.

Take Back Your Power

I hope you will give it a try. I’m not suggesting to go extreme. Just ask yourself this question when you are considering buying something: is this really going to add value to my life? Will this item add to my longterm happiness?

As Christophe and I are getting rid of more and more stuff in the apartment in Paris (stuff that wasn’t even ours to begin with), we feel much happier in the space that we have. Not being surrounded by all that clutter is a daily joy.

Karen Drost is passionate about health, especially nutrition. So much so, that she trained and qualified as an Ayurvedic nutritional therapist in 2010. She starts every day with yoga, breathing exercises and a meditation. When she's not helping others change their habits to improve their health and happiness, she can be found lost in a book or enjoying precious time with her partner Christophe and/or her horse.